You can’t go very far in the Pacific Northwest without being reminded of our NFL team, the Seattle Seahawks. This year is no exception. As any Superbowl Champion, we are hopeful to make it back to the Big Game the year after winning. In order to make it down to Arizona, it comes down to one more game, the NFC Championship. 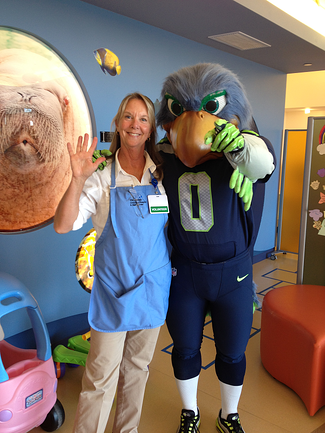 Connie, our Permit Technician with the Seahawk Mascot, Blitz!

The Green Bay Packers are not shy to our stadium nor the 12th Man Fans. And of course with the return of the Cheeseheads, we are again reminded of the 2012 Packers-Seahawks officiating controversy. On September 24, 2012 Russell Wilson threw a Hail Mary pass to the end zone, intended for wide receiver Golden Tate. However two players, one from each team had their hands on the ball. It resulted in a touchdown given to Tate by a call by the replacement referees and a 14-12 victory over the Packers. (To hear more about the controversy, you can check out the Wikipedia page dedicated to this historic call)

Sunday, January 18th will see another matchup between the two teams. We’re sure the NFL commentators will remind the nation of that “Fail Mary” call with replays, comments and unnecessary reminders. It won’t change the outcome of that game or the season of 2012, and it doesn’t help either team come Sunday. We aren’t trying to rub salt in the wound but Seattle is playing for the NFC Championship this weekend. There is no Golden Tate or replacement refs on the field this time around, giving our chances of another Fail Mary slim pickings.

As a local sign company, we are proud to support our Seattle Seahawks and are wishing our  2014 World Champions the best of luck!!

Seahawks going to the Superbowl